I haven’t done this feature in a while, but this movie deserves a write up, I suppose.

Truth be told, I liked Man of Steel the first time I saw it. It was not a perfect movie, by any means, but it was enjoyable on the whole provided I didn’t think that much about what would really happen if two supermen were to fight amongst populated buildings in downtown DC’s New York analog.

So I was looking forward to the sequel where they might… just might… take some of the criticisms of the first movie into account and craft a better Superman story.

Instead, we got Batman v. Superman: Dawn of Justice. Spoilers follow.

Being on the internet for as long as I have, I’ve heard all sorts of criticism of this movie, and most of it is true, but a lot of the vitriol behind those criticisms seems unworthy.

Batman v. Superman: Dawn of Justice just doesn’t deserve that level of emotion because it doesn’t earn it. It doesn’t earn any emotions really.

For the movie’s greatest sin isn’t turning Batman into a deranged homicidal vigilante or Superman into a joyless mope who is almost a secondary player in his own sequel or Doomsday into a retreat of 2008’s the Incredible Hulk’s Abomination, or the plot holes, the unanswered questions regarding superpowered vigilantes and how they should be treated by people and the government, Jesse Eisenberg’s curious acting choices playing Lex Luthor, or the resolution of the titular character’s pointless conflict based on having a mother with the same name.

The problem isn’t even Batman’s fever dreams of a future where Superman is tyrant of the world.

The movie’s greatest sin is that it is all dreadfully dull.

Zach Snyder and Warner Brothers have managed to take a bright vibrant comic book universe with over the top action and turn it into a movie where I was frequently checking how much time was left on the Blu-Ray. 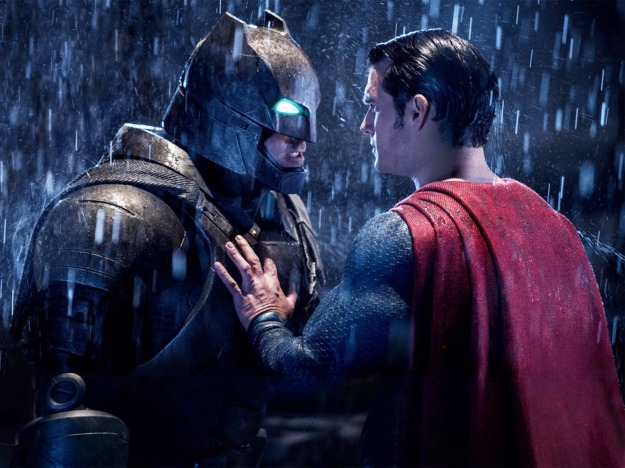 Even during the finale in which Doomsday faces off against Batman, Superman, and Wonder Woman, I was asking myself, “Is this it?”

Well, no, it isn’t it, because the ending sets up the inevitable sequel where Justice must be Dawned or something, and I just don’t care.

Really, unless Batman packs an anti-Force spray in his utility belt, this fight should have been over in 5 seconds.

Batman: Give it up, Vader. You can’t beat me. I’m Batman!

Vader: <lifts hand and uses the Force to telekintetically crush every bone in Batman’s body> “I find your lack of faith… disturbing.”

Better than The Dark Knight Rises.

With the Labor Day weekend upon us which officially marks the end of the Summer movie season and beginning of that awkward phase before the Christmas movie season ramps up, everyone seems to have packed up their suitcases full of cocaine, piled the hookers in the back of the limo, and headed out of town for the long weekend.

As such, I’ve only got one piece of news today.

The film will start shooting in Detroit next year.

Residents are advised to wear the standard flak jackets they were issued upon moving to Detroit and stay indoors until Robocop shows up.

Thank you, I’ll be here all week. Tip your waiters.

I honestly don’t know how this movie about street racers turned highway robbers became an over the top crazy action franchise, but I’m okay with that. The longer it goes on, the more over the top crazy it gets and the more it just continually gives the laws of physics the finger.

It’s going to get crazier as Tony Jaa joins the cast.

Jaa is a stuntman-turned-actor who spent his youth as an elephant herder. He watched martial arts movies and decided to follow in the footsteps of heroes Jackie Chan and Jet Li. He made three Ong Bak films, which were global hits, and is considered a symbol of national pride in his home country.

Fast 7 will be his English-language debut as well as his first studio picture.

“I have been a big fan of the Fast and Furious franchise,” said Jaa via e-mail from Thailand. “The films are fast-paced, fun and keep the audience involved. There is a great mix of humor and action, something I really appreciate. There is no better film to be involved in for a first U.S. studio production

Unnecessary sequels are still unnecessary, but when you start going over the top with the crazy action, they still can be fun.

X-Men: Days of Future Past

Looks like schedule conflicts will keep Stan Lee from showing up in the next X-men movie. Oh well. I am ambivalent.

Per Cosmic Book News, Bryan Cranston has reportedly been cast to appear as Lex Luthor in 6-10 movies. Which doesn’t mean he’d be an active part of them, but probably more along the lines of an evil Nick Fury popping up here and there to chat with a hero or villain.

Of course, they also report that Ben Affleck reportedly has a 13 appearance deal as Batman and that the WB wants (of course) Matt Damon as Aquaman or the Martian Manhunter which just seems like fanboy casting and tells me that is probably weapon’s grade bull****.

Especially since the whole Batman/Superman movie itself puts off the feeling that a bunch of WB movie execs lifted their faces briefly from the mountains of cocaine on their desk, saw how much money The Avengers made, and then decided to do the laziest thing possible (throwing Batman into the next Superman movie), scheduling it to release in less than two years, before they returned face first into the coke.

Alright… I suppose I should get this out of the way. Your new Batman is Ben Affleck.

Yeah. So there’s that…

Probably the best reaction I’ve read came from the comments on this thread, where nearly everyone is briefly possessed by the spirit of Southie Batman. Language warning, but still pretty funny to think of Batman talking with a thick Boston accent. 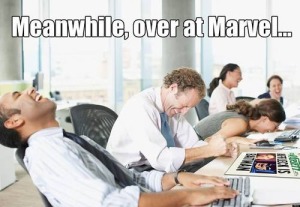 They have their director of photography:

You film nerds out there will have to tell me the pros and cons of shooting on 35mm vs. digital, because I have no idea.

Agents of SHIELD (Because I refuse to type six periods in a row.)

And speaking of Batman, here’s the new trailer for Arkham Origins, which appears to be a Year One sort of story for the video game franchise.

Because someone out there thought, “Return of the Jedi was good, but it needed more Joker.” And then they took the Lord knows how many hours out of their life to make that happen.

Slow news day. I don’t know… get some work done. Go outside and see that thing called the ‘sun’ that I’ve heard about.

Star Trek fans who recently went through their own two year experience of coy denials, secrecy, and having their chains jerked around by Paramount and JJ Abrams may now officially indulge in a bit of schadenfreude at the next two years of Star Wars as Disney and JJ Abrams start jerking us around with all sorts of coy hints about the next Star Wars movie.

As long as there’s no time travel, Darth Vader and the Emperor stay dead, and we don’t get a scene with Leia getting frozen in carbonite as Han Solo looks on, I think I’ll be okay.

Useless rumors of the day: Yesterday, Lex Luthor was going to be played by Bryan Cranston. Today, it’s Mark Strong (aka Sinestro from that Green Lantern movie everyone would like to pretend never happened.)

Tomorrow, it’ll be… I don’t know, CGI Telly Savalas voiced by Clancy Brown. Actually, that last one might be sort of awesome.

Having watched it, I’m trying to focus on the fact that I really liked the last Thor movie instead of the fact that the last time I watched a movie that involved Natalie Portman jetting around the galaxy with space wizards and aliens, I came away feeling like my childhood had been bludgeoned to death with a Gungan.

And the trailer for this one:

For some reason, I’m less excited about this movie and more increasingly filled with a deep abiding hatred for it. Maybe that’s my nerd brain’s self-defense mechanism kicking in making sure that my expectations for this film are nil so I’ll be pleasantly surprised by it when it doesn’t completely suck.

Or maybe I’m just pissy about it because I can’t stand arbitrary conflict for the sake of conflict.

Or maybe it’s because the whole shebang seems less like it was the end result of a serious planning meeting and more like something someone in Marketing pulled out of their ass so the WB wouldn’t seem like total wankers at ComicCon as Marvel was hyping their movie about the Ent and the talking raccoon and how it fit into their plans for an overall movie universe.

Regardless, I suppose if we’re going for an ‘older’ Batman, you could do a lot worse than Jeffery Dean Morgan.

In addition to the 25 or so confirmed villains in the movie, there may be another hero helping out Peter Parker.

But will it have a dance number?